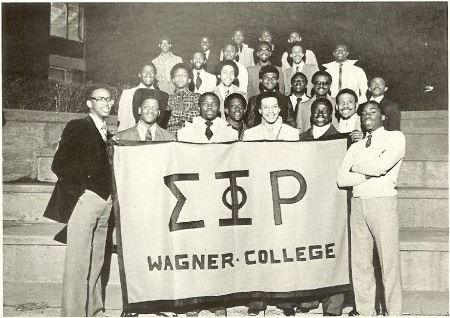 Sigma Phi Rho Fraternity Inc was founded on April 26th, 1979 at Wagner College on Staten Island, New York by thirteen motivated and conscious young men with diverse backgrounds but similar ideologies. The founders believed that a fraternity must assist in the development of its members personality and encourage them towards academic excellence. They deeply believed this would widen and deepen members social network and introduce them towards cooperative living and foster within them the high ideals of manhood, strong character and good moral judgment.

It was this philosophy and the revitalization of global community, that led to the establishment of four organizational goals: "the continual building of lasting brotherhood, fulfillment of developing strong character and good moral judgement, service to the community and academic excellence. Towards these goals this organization is dedicated".

" It was our intention to create an organization that personified the broadening awareness of racial pride, activism and moral leadership that had emerged in the early 70's. We believed that fraternities must boldly and publicly be voices for the weak and defeated. We were young men of scope, power and courage who were willing to take the lies to trail; to bear the hopes of others on our shoulders; to deliver service to the communities in which we lived".